Quick pic for the week... 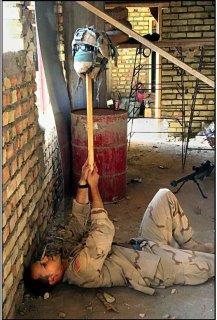 First of all I want to give y'all a big thanks; I passed 10,000 hits recently. It's kind of a milestone for my humble little blog, especially when I first started this deal on a whim. I just wanted a place to get some stuff off my chest and this is definitely cheaper than a shrink, for sure(never been to one and I'm scared what would happen if they figured out what was bumpin' around in this noggin'). I've made some good friends, a couple people really mad, but most of all I've found a group of fellow bloggers that hold "these truths to be self-evident". What more could a good ol' boy ask for? So...to you-thanks. 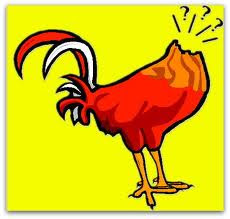 That being said-I have to inform my readers, that for the next few weeks, I will be out of pocket for the most part. This is a busy time of year for me; I teach some classes and they consume all of my free time. I usually feel like a chicken running around with my head cut off. I will still be lurking, maybe just not posting as much. I am sorry, but it can't be helped. Nothing like thanking y'all for reading and then bailing, huh? This too shall pass my friends. So-be cool and I'll catch y'all on the flip side. Y'all have a good 'un.
Posted by Hillbilly at 11:42 PM 3 comments:

I thought we were done with the Commies...

Posted by Hillbilly at 11:38 PM No comments:

I don't really know what to say except, what the hell? Neat concept I reckon; I'll have to get a plastic surgeon to give me finger extensions just to wrap my hand around it. I bet it kicks like a mule. Whatcha' think? Super Mega Zombie Slayer?!?  Y'all have a good 'un.

Quote of the week... 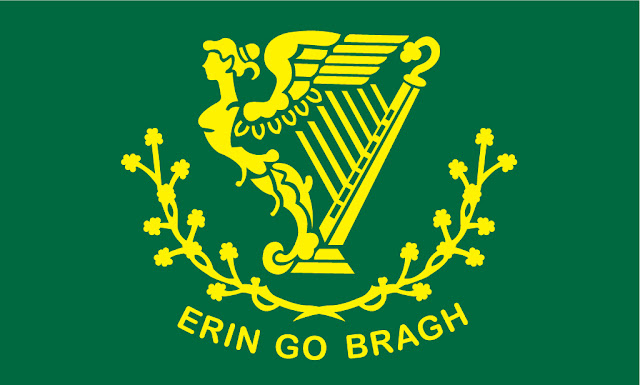 I'm not really sure what spurred me to do this particular post today, but I feel strongly about it. Our POW/MIAs. 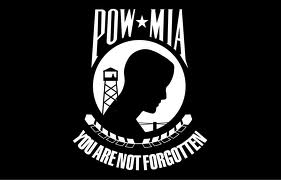 We talk about the military, as a country, and grandly profess to "support the troops". Or,  you hear those saying,"I don't support what they do but I do support them." It's a hard pill to swallow sometimes and I don't know what to even say sometimes as I watch people say these words on tv or, listen to them as they take a sip of their Starbucks. I have never had the honor of serving our country in the military. I've often wished I had bucked what was expected of me and just joined. Don't get me wrong, I have no illusions of some battle somewhere where I'd be carrying the flag and such. I understand there is no romance in the death of soldiers. My statement comes from a deeper place; a sense of obligation that I owe something to those who have defended our nation in the past and a belief that we are still the greatest nation on this blue-green ball. My life now is that of a public servant. I do the best I can to take care of my fellow American. That's the biggest thing I think; folks that sign up to wear the flag on their shoulder tend to be sheepdogs caring for the rest. Our Soldiers, Marines, Sailors, and Airmen along with firefighters and cops(the real ones that get it).

College was an eye-opener for me. I was relieved of the bonds of working all the time in the family business, while not in school, and was told to go make good grades( 250 miles from home and a grant/loan-yeah!). All this while co-eds were walking down the main concourse in cutoffs. Right. I started off with a bang and discovered the joys of a good keg party, so on so forth.You get the picture; girls, beer, parties, the works. As I was walking to class one day I noticed a small table with some ROTC guys sitting around. They were selling POW bracelets. I asked about them and got the story. I was moved to be honest and bought one with my last ten bucks. It was a red aluminum bracelet with the name of a USAF pilot, from my home state, shot down over Vietnam.  As they days wore on several people got to asking me about it and it made me want to know more about the guy I was honoring and the whole "POW thing". I researched more about it and it ended up have a fairly sobering effect on me. You have to know that the opening shots of Desert Storm were being fired and I wondered to myself if it was fair that I was having a good ol' time when there may be guys out there who never had hope of seeing the green grass of home again. I'm not going to lie and say I straightened myself up like a flag pole and graduated with a 4.0, but the thought of that guy on my wrist helped make me realize that I owed it to him to make the most of myself and make a difference. I've also tried to instill that ideal into my kids-make a difference. I can only hope I have. 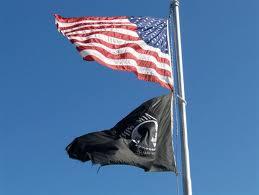 I did a search before I wrote this and was unable to find a real count of how many Americans are really still out there; I do know this, it is too many. I'd like to think that the US government does all it can to rescue or find our men and women that are missing. Probably not; you hear of stories here and there. Who knows? Some of you that have served may know better than I. I'll say this-If there isn't some sort of group that only works on POW/MIA rescue then there damn well should be. It, along with veteran hospitals, benefits, and pay, should be a top priority. A "Black" group that kicks down doors and stomps guts till everyone is home. I guess that sounds a little too Tom Clancy, maybe...I don't know.

I started this soapbox speech off in one direction and ended up here. Sorry, I do that sometimes. I reckon the biggest thing I can say is this: Always remember and respect those who do something with little or no thought for themselves, namely our military. Men and women die everyday for something that may or may not be important to them, but they do it anyway. Then there are those who are somewhere, wishing to be home, just waiting. There aren't many things that make me teary-eyed, but the thought of that does. So...for those of you that are waiting somewhere-We have not forgotten, nor will we. May God Bless you and hold you in his hands till you come home. Thank you.

I'd like to welcome Sandy to Gravy and Biscuits; she's been a visitor and has now hit the ol' follow button. Go by and check out her blog, Oklahoma Transient. It a great all around  prepper blog that may help you out someday. Thanks for stopping by.

PS-the pic is no reflection on Sandy-I just like it. 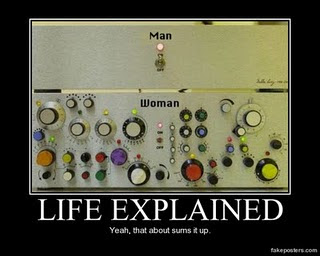 I popped on the 'puter this afternoon and found that someone else joined the fray here at my humble blog. So, welcome to Jaymie from Family Best. She has a great little blog herself so run on over and give it a read. I'll do my best to keep you in the loop, Jaymie, and maybe a little laughter to boot. Grab a glass of sweet tea and a plate, the gravy is ready. 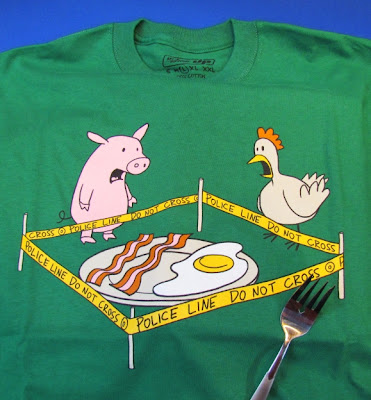 Hollwood still has some sense?

Who's side are you on, anyway?

First, I want to say welcome to Orange Jeep Dad. I've seen him around the neighborhood and am proud to have him as a reader. Thanks, Bubba. As the man with the top hat says, "sit down, have some popcorn and enjoy the show".

Now... to the topic. I just finished watching Sons of Guns on the DVR and was a little worried by the end of the show. Now let me first say that I watch this show for the entertainment value and the hope that I may pick up some knowledge here and there. Never know when you may need some little tidbit you picked up(I have found that I learn best by watching; I tend to remember everything I see-show me how and I'll be doing it in five minutes). And before you say it...yes I know that the owner seems to be a major jackass at times in handling his people. I expect a great deal of those I work with, but sometimes he could use a different tact; I have often though that if he used his tone or language with me that I'd tell him to get bent. Anyway, the RedJacket crew was building a non-lethal crowd control vehicle for the New Orleans PD, based on a Ferret Armored car that they already owned. They added numerous tear gas grenade launchers and a water turret. Not bad, huh? But then they remounted a Browning 1919 .30 machine gun that the NOPD had in stock also. Now, maybe I heard wrong, but I thought this thing was NON-LETHAL. They said it would serve as an intimidator. The hell you say. I'd like to see the SOP on loading up the 30 cal for crowd control at Mardi Gras. And yes, I saw the part about them building this after the NOLA Halloween night shooting, but when did the PDs of America start using a 600 rd/min machine gun to INTIMIDATE? To be honest it sent a cold chill down my spine. I understand that during Katrina their officers were shot at in their patrol cars, and I get that. I do. Use the armored type vehicle to get around safely and help those out who need it; tell me this-what happens when Officer Joe Bag O'donuts, who has 8 months on the force, gets a little scared by folks bouncing a beer bottle off of the armored hull during INTIMIDATION duty and cuts loose with the old 1919? I watched the LA bank robbery on tv, live, as it happened back in '97. I know that today's officers need more firepower to combat that kind of threat and I don't begrudge them one bit. I have friends that are cops and I want them to have every thing they need to protect themselves, and me; but a freakin' Browning 30 cal? Are you serious? I kept asking myself,"who's side are these RedJacket guys on?". Damn. Once again it seems that our PDs across the US are turning into para-military organizations that bust doors first and ask questions much later. How many times have you heard that one lately? If there are any LEOs out there that think I'm way off base, please let me know. Maybe it's just me being paranoid; you guys tell me what you think. Mull it over and have a good 'un. 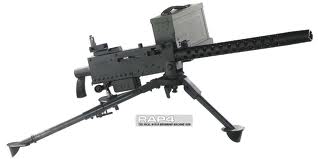