Well, as promised-finally-I'm getting this posted. I received 40 rounds of Fiocchi .223, 55 grain, from bulkammo.com a couple of weeks ago but have been unable to shoot due to the Southeast's forever changing weather. There's a saying we have around here, "If you don't like the weather, give it thirty minutes-it'll change." And so it goes. Let me start this by saying I received no compensation from the folks at bulkammo.com, just the two boxes of ammo to try out for them. It showed up at my door just a couple of days after I talked to the company via email; quick delivery. I couldn't wait to get out to the field. 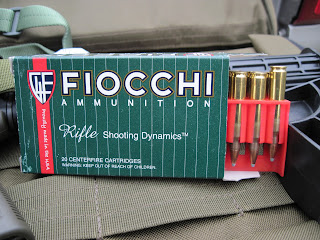 I set up a target at fifty yards to see what we could do with this magic green box of fun. As I opened the box I saw that the ammo is packed in plastic sleeves designed to protect the ammo, not just slammed into the box like the cheaper plinking stuff. This is definitely something you see less and less of today. Usually this treatment is reserved for higher priced hunting ammo and made me think that Fiocchi may have a pretty good opinion of their product. 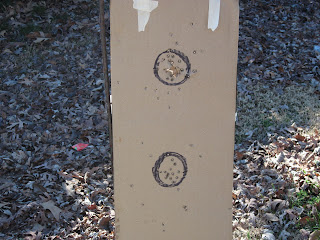 I used an AR-15 with a 16" barrel and a holographic sight. Just for diversity sake I used thirty round mags loaded at ten a piece, changing between Bravo Co. metal mags and Magpul P-mags. Both had no problem delivering this ammo to the chamber. I had zero jams or FTFs and this stuff just kept on flying. Since I usually shoot 55 grn anyway, this stuff was right on target. Since this range was limited to no more than fifty yards it is hard to say if it was zeroing in any better than the usual brass ammo I use, but after a few rounds of the cheap stuff, it did seem as if it was hitting the center a little more often( I used the top target-a buddy used the bottom to sight in a new EOTech). I used several shooting positions and as you can see my shooting and moving needs a little work; that's where some of those "strays" came from. That's for another day, though. Since my shooting partner was standing there, I handed him five rounds to shoot. He loaded them up in a steel mag( a pretty rough one to boot) and his rifle fed and fired it just as well as mine-no issues. The test was over too quickly.

Overall I'd say this is good stuff. This is my first experience with Fiocchi's rifle offerings and I was pleased. The brass was clean and looked to be in excellent condition and it was packaged against damage well. It was fired from two different rifles through three different kinds of mags and had zero loading or firing issues. It was accurate and reliable; what more can a fellow want. I'd recommend this ammo to anyone and I'd say the folks over at bulkammo.com can help you out. They were more than friendly and got the stuff to my door faster than expected. Thanks for stopping by and if you have any questions, feel free to comment. Let's go shoot some more! Y'all have a good 'un. 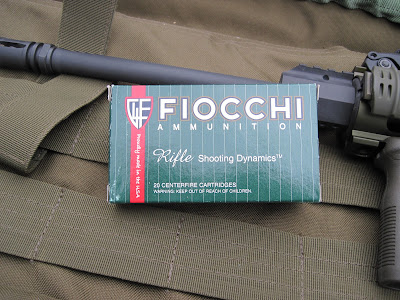 Posted by Hillbilly at 1:59 PM