Today is not a deep thoughts kinda' day for me. Been kind of lazy lately. I took a day off from work yesterday to escort LBD(littlest blond daughter) on a field trip. She had a grand time, and although I think the instructor sucked, everyone went home happy. I also got to watch OBD and MBD(oldest and middle) run a cross country meet. They both did real well and never quit. They even sprinted the last 75 yards or so as I told them to do; that's when all the other kids started to poop out and walk when the saw the finish line near. They both gained some; just goes to show that you never, ever, give up. That's the family motto: Tough it out. I tell them often: "You can be girls, just not sissies." I think they like that.

I found some stuff while drifting on the ether today. There is a  Facebook page called SEALS of Honor. It is dedicated by a family member of a SEAL that died in the line of duty. Some of the pictures or quotes came from there and some I had lying about. I think these would make some great motivational posters like you see in an office hanging on the wall. 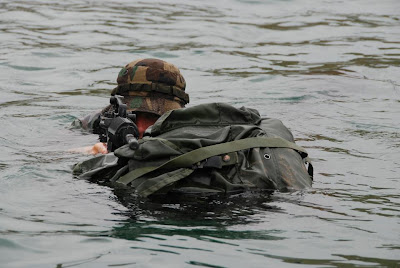 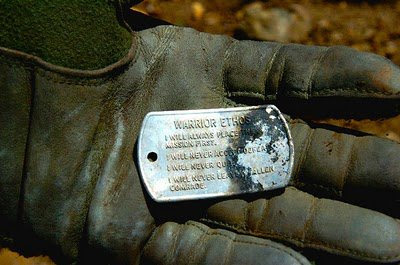 A dog tag found in the wreckage of a helicopter shot down during Operation Red Wings, where 19 troops died on June 28, 2005


The sheep are a quiet lot that mind their own business keeping together eating not paying much attention to the world around them. No one is really in charge and they just stick together. They are comfortable with the status quo and are content to wander over the fields feeding as they go.


Then there is the wolf. He cares little for the status quo and wants to mix things up. He is not involved in anything other than the business of the sheep. The traditional predator prey relationship. Where as the sheep have their eyes on the side of their head preventing any depth of field, the wolf has his eyes in front to keep his focus on the matter at hand...his next meal. They are cautious when approaching the sheep for they know the watchdog is near. They do not want to encounter the sheepdog that could ruin their plan. 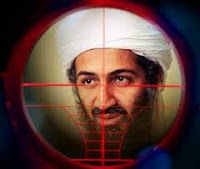 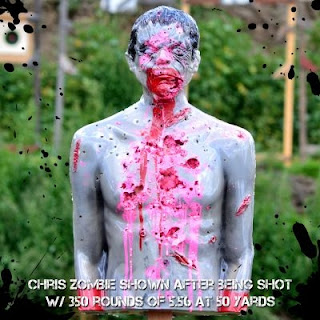 Anything worth shooting is worth shooting twice. Ammo is cheap. Life is expensive
Just some food for thought. Enjoy and have a good 'un.
Posted by Hillbilly at 11:02 PM